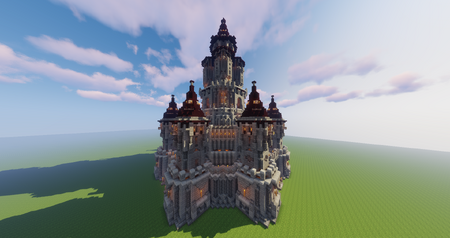 The Capitol is a special structure in CivilizationCraft that represents your civilization's central government. It is the first structure built in any civilization.

The Capitol is located in the Capital of your civ. If an enemy civilization captures your Capital during war, all towns in your civilization will be captured.

For 250,000 coins, you can move your Capitol. Moving your Capitol WILL shift over your culture area. Any of your buildings or claimed chunks that are outside the new zone will be destroyed.

Moving your Capitol will remove the old Capitol building, so plan for it! Clean out all chests and storage there. Also, all 16 chunks of the Capitol need to be within the current Culture in order to place.

The Capitol includes several unbreakable beds, chests, furnaces, 8 Arrow Turrets and Trade Goods Sockets. Once you've set your civilization up you're able to protect your stuff inside it.

The Trade Good sockets are the same as in Town Hall, and will allow you to bring Trade Goodies in from Trade Outpost to greatly benefit your civilization.

The Capitol is the Town Hall of the Capital City. You can only have 1 Capitol in your civilization at a time. It is 4x4 chunks and has 8 arrow towers along its four corners to make it more difficult to capture.

The Capitol plays a key part in war. Firstly, the Capitol is the spawn point for all Capital town members during a war. Additionally, this is the building your civilization must defend or capture during a war in order to win.

Each capitol contains 8 control blocks inside them, each with 100 hit points. During war these will all need to be destroyed to destroy the capitol.

When an enemy destroys all 8 controls blocks of a capitol it results in the civilization being defeated. More info in Captured Civilizations and War.